Meeting a wine maker and talking to them about their wines is always exciting.  Here is a chance for you to talk with some prominent BC wine makers to celebrate BC Day on August 2.  Below is the press release from the BC Wine Institute.

BRITISH COLUMBIA -This BC Day long weekend, the British Columbia Wine Institute is throwing a big party in honour of beautiful British Columbia and the wonderful wines that are grown and produced in the province.

Consumers are invited join some of BC’s top winemakers at Vancouver’s 39th & Cambie BC Liquor Store anytime from 3-6 PM on Saturday, August 2, to sample some of the 12 BC VQA wines that will be available to taste. The wines will be paired with tasty tidbits of local foods as prepared by Vancouver-based Forage restaurant.

These six acclaimed BC winemakers will also be signing bottles of BC VQA wines, giving fans a chance to ‘meet the makers’ of their favourite BC VQA wines, and the opportunity to discover new BC wines.

Holly Conway with the BEAT radio will be live on-site, broadcasting festive tunes for this FREE consumer event:

MEET YOUR MAKER WITH BC VQA WINES

(inside the 39th & Cambie Signature BC Liquor Store)

The festivities continue well beyond the tasting event, with 30 scheduled BC VQA wine tastings taking place in BC Liquor Stores around the province throughout the month of August. Qualified tasting staff will lead consumers through tutored tasting flights of three wines at a time, showcasing 12 in total, which demonstrate the bountiful diversity of wines produced in our beautiful province. (Click here for the schedule of tastings and locations.)

British Columbians have so much to celebrate: From the sea to the mountains, from our wildlife to our culture, from our natural resources to our growing industries. What better way to celebrate our province’s abundance of riches than with delicious BC VQA wines! 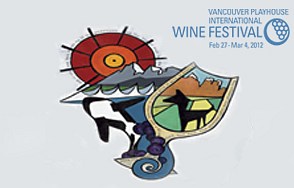 Have you had a chance to check out the wine events coming up at the Vancouver Playhouse International Wine Festival?  Did you know that tickets for the events go on sale this Tuesday, January 10?  I’ve checked through the events, and I’d like to give you a few recommendations.  Maybe you will see me at one of these events too.

Two years ago I travelled down to Chile and visited wineries from the Aconcagua, Maipo, Casablanca, and Colchagua Valleys.  Some of the wineries were Casa Lapostolle, Montgras, Montes, Errazuriz, and Casas del Bosque.   I was impressed with how much the wineries cared for their vineyards and the production of their wines.  One of the nice thing with Chile, is that it is dry due to it’s location on the west coast of South America, and the Andes Mountains on it’s eastern border.  The dry climate, plus topography, and soil factors have made the area a great place to grow grapes.  There is very little, or no, phylloxera louse to attack the grape vines, plus the dryness keeps fungus and mold at bay.  So less pesticides and/or herbicides are needed here.  Many of the wineries in Chile indicate that they are organic or follow organic principles.

Chile is a wine maker’s paradise.  They get 3 weeks more ripening time than in Bordeaux and 300 + days of sunshine each year.   The cool air from the Andes cools the grapes in the evening so that the grapes mature slowly so that they reach full phenolic ripeness; lots of ripe fruit and a good backbone of acidity. The adjacency to the coast, and the cool Humbolt Current helps produce coastal fog which cools the grapes near the coast, such as from the Casablanca Valley and San Antonio Valley. 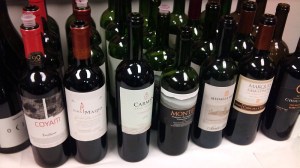 Cabernet is King is Chile.  With the 300+ days of sunshine, the Cabernet Sauvignon grapes produce very full-bodied, ripe, supple wines.  Concha y Toro’s Don Melchor is one of the top quality wines for this grape.  Merlot and Carmenere come in, in 2nd and 3rd place.  Yet they were thought of both being Merlot for many years.  The grapes were planted together in the same vineyard and the grapes and leaves of both vines look very similar.  It was only fairly recently that the Carmenere grape was identified (it’s a Bordeaux grape btw), and has become a signature grape for Chile. A second signature red grape is coming through the ranks, and that is the Syrah grape.  I think people started to recognize Syrah’s potential in Chile, with Aurelio Montes‘ plantings in the Apalta Region of the Colchagua Valley.  There he produces an ultra premium Montes Folly wine from Syrah.

Most people probably think of Sauvignon Blanc and Chardonnay when they think of white wines from Chile.  Probably also the Casablanca Valley, where a lot of very good Sauvignon Blanc and Chardonnay are produced. An upcoming region for Sauvignon Blanc is slightly south of the Casablanca Valley and much closer to the coast is the Leyda Valley.  While the Sauvignon Blanc wine from the Casablanca Valley can be more tropical fruit, from the Leyda Valley, expect more citrus and herbal aromas and flavours.  Have you ever heard of Moscatel of Alexandria?  You might not have, but you probably have tried some Chilean Pisco.  Pisco is produced from the Moscatel grape.  Riesling and Viognier and two grapes with great potential.  I don’t think a particular region is well-known enough for these grapes, but I would hazard to guess that the Riesling grape would be very good in the Casablanca and San Antonio Valleys while Viognier would shine in the more inland, warmer regions, like Aconcagua, Maipo and Colchagua Valleys. 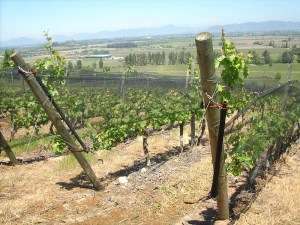 Cabernet is more than just one grape.  Most people know of Cabernet Sauvignon, the highly revered grape from Bordeaux, but there is also another Cabernet, Cabernet Franc, which can also be found in Bordeaux, but is better known in the Loire Valley in France. Cabernet Sauvignon can be found around the world.  California’s Napa Valley produces some famous Cabernet Sauvignon, such as Stag’s Leap, and don’t forget Chile!  Cabernet Sauvignon tends to have quite high tannins giving it great longevity potential in the bottle. The flavour profile is Cabernet Sauvignon according to Wikipedia, “When Cabernet Sauvignon is young, the wines typically exhibit strong fruit flavors of black cherries and plum. The aroma of black currants is one of the most distinctive and characteristic element of Cabernet Sauvignon that is present in virtually every style of the wine across the globe. Styles from various regions and producers may also have aromas of eucalyptus, mint and tobacco. As the wines age they can sometimes develop aromas associated with cedar, cigar boxes and pencil shavings. In general New World examples have more pronounced fruity notes while Old World wines can be more austere with heightened earthy notes“.

Cabernet Franc in Bordeaux is used as a blending grape, offering cedar, tobacco, raspberry, cassis and violets aromas and flavours. It is lower in tannins than Cabernet Sauvignon, and also can have a green pepper or leafy character. You can also find Cabernet Franc grown around the world.  Here in BC we have single varietal bottles of Cabernet Franc, such as from Tinhorn Creek.

As an aside, in my Wikipedia check, I see that there are 3 other Cabernets, formed through a hybrid of the Cabernet Sauvignon grape with another grape variety.  They are:

I have not had time to check on these other Cabs but will do some further research in the future.

In person at:
Vancouver Playhouse Box Office
601 Hamilton Street (at Dunsmuir)
Vancouver, BC
Monday to Friday 9:00 am-5:00 pm