If you like to laugh and enjoy a drink why not try a Vancouver Theatre Sports show this October?  Their press release is below.

‘Double, double toil and trouble; Fire burn and cauldron bubble.’ Shakespeare’s three witches aren’t the only people who know how to brew a mean concoction.

This month is Spooktober at Vancouver TheatreSports™ (VTS), and the company is presenting a ‘fangtastic’ foursome of appropriately spooky improv shows. As a ‘bone-anza’ for patrons, VTS Bar Manager, Paul Belsito has crafted three ‘boos-y’ Creepy Cocktails – potions and poisons in keeping with the ‘spirit’ of the event.

The Neil Macrae Bar & Lounge will also be offering its regular menu of wines, spirits and beer.

Get a group of ‘f(r)iends’ together and make a ‘zombie-line’ down to the Improv Centre. Treat yourself to a hilarious evening of meet, drink and be scary.

Creepy Cocktails are only available during the run of VTSSpooktober from October 9 through 31, 2018 at The Improv Centre on Granville Island. Show information and tickets for all VTS shows can be found at vtsl.com 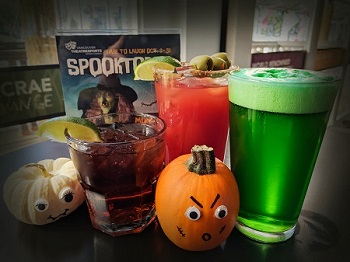 The Crawling Pumpkin Cocktail will be available all evening on its own for only $6.

6pm start (feel free to start the party earlier to ensure ample time at all establishments)Wild Rice: bacon and scallop siu mai on pumpkin puree, paired with a mystery Appleton’s pumpkin cocktail for $12.95

Paddlewheeler Pub: all Stanley Park beers on for $5.25, Bloodtinis for $6.25. Great prizes for best costume and several Halloween themed shots on special.

(bit of detouring to try and get the most from each venue but we all know you could use some fresh air and a walk to make room for more drinks!)

*If you feel like a sweet treat before ending the night at Boston Pizza, visit Menchies before 11pm for some freaky flavours and toppings!

12pm “end” at Boston Pizza (don’t worry if you arrive past midnight, they don’t close till 2am!): Enjoy a Bobbin’ for apples vodka cocktail for only $4.99 when requested.

In a few short weeks Halloween will be upon us. It had me thinking about wine and what would you serve for Halloween? What would a Twilight fan enjoy? I did a bit of digging (not grave digging) and have some fun, and interesting information for you.

As luck would have it, yesterday WOOT had a Vampire Vineyards winery deal for you:
– Vampire Merlot 2009
– Vampire Cabernet Sauvignon 2008
– Trueblood Pinot Noir 2007
– Dracula Syrah 2007

Vampire Vineyards was founded in 1985 by Michael Machat in Paso Robles, CA. Michael, the president and founder of Beverly Hills-based TI Beverage Group, parent company to Vampire Vineyards, “…had this idea that it would be cool if somebody had a wine called ‘Vampire’ and they made it in Transylvania. It was so obvious, I thought surely somebody had done it,” he says. But in his research, nobody had tried it. He wanted a name that would attract young people who wanted to drink wine and easy to understand labels.

“When young people want to buy wine, they just want to get something to drink. They’re looking around the store and Vampire brings up lots of pleasurable connotations in their minds. They don’t know what else to drink so they buy Vampire. It’s cool, we get the new drinkers.” according to Michael.

He says 40 per cent of customers who are buying Vampire are under 30. That’s unusual in a business where most consumers are 40 and older.

Maybe you prefer to purchase some wine from Transylvania for Halloween?  Transylvania is actually a region within Romania, so why not purchase a red wine from Romania? Romania has been producing wine  over 3000 years according to Wikipedia. Local vine varieties such as Zghihara de Husi, Cramposia de Dragasani, Galbena de Odobesti, Feteasca alba, Feteasca neagra, Babeasca, and Tamâioasa româneasca formed the basis of the wines until the 18th century when more common Western European grapes (vitis vinifera) were introduced. Good red wines are made in the southern half of Romania (Oltenia, Muntenia and Dobrogea regions).

I checked with Everything Wine, and went to the BC government Liquor Control Board wine sight and neither had any wines from Romania.  Maybe some private liquor stores carry Romanian wines?    More research is needed.

What other option could you have?  How about drinking “Bull’s Blood“?  Well, not literally blood from a bull, but a wine called Egri Bikavér.  This is a red wine that comes from Hungary, which is adjacent to Romania.  Egri Bikavér is Hungary’s most famous red wine. It comes from the Eger wine region of northern Hungary.

“…According to legend, the name originates from the invasion of Suleiman the Magnificent around 1552. To motivate and support the small group of soldiers during the Siege of Eger castle they were served delicious food and a lot of red wine. Among the Turkish soldiers it was rumored that bull’s blood was mixed into the red wine, as otherwise the strength and firm resistance of the town and castle of Eger could not be explained. Finally the enemy gave up.”

I did another check with the BC government liquor store website, and with Everything Wine, but no Bull’s Blood.  Hopefully there is some private wine shop carrying this wine.  I did read that the Danube restaurant in Burnaby was serving a dish that used Egri Bikavér.  So there must be some supplier in BC.  Please email me, or leave a comment in my blog to let me, and others know where they can buy some Bull’s Blood!

I hope I’ve given you some ideas for wines for Halloween.  Enjoy!