Vancouver is blessed with a wide range of Asian cuisine, but what kind of wines do you pair with these dishes?  Have you tried German wine?  The BC Liquor stores want to help you find the wines to match the food, and have a free consumer event for you on Saturday May, 9 at the Cambie Signature liquor store.  Details are below.  Enjoy!

Vancouver, BC – German wines will share the spotlight with Asian foods in BC Liquor Stores throughout the month of May, 2015. 60 stores will feature lively displays of a select 12 German wines, including a sparkling Riesling and a Dornfelder Pinot Noir. Customers can pick up their complimentary recipe booklet at all participating stores and a FREE consumer event will kick-off the promotion featuring the Asian foods of Vancouver’s own Stephen Wong – wine writer and chef extraordinaire.

The promotion showcases a wide assortment of Germans wines, giving consumers an opportunity to learn about the diversity of the German wine offering and how well they pair with Asian cuisines. A brochure has been developed which will be on display in all 60 participating stores, offering food pairing suggestions for the participating wines, along with four excellent Asian recipes; Pakoras, California Sushi Roll, Seafood Laksa and Szechuan Pork.

At the consumer event on Saturday, May 9, 2015, consumers can try samples, at no charge, of all 12 featured German wines paired with gourmet Chinese foods, hand-crafted by Chef (and acclaimed wine writer) Stephen Wong. Accredited Sommeliers will present the wines on rotation throughout the event, paired with the following Asian Appetizers:

Cambie and 39th Signature BC Liquor Store (Cambie Kitchen) Vancouver, BC
Saturday, May 9, 2015
3 – 6 pm
German wines are generally heralded as great food friendly wines. This is a very bold statement, but most sommeliers and other food and wine professionals will agree. British Columbia, being the multi-ethnic province that it is, hosts a wide array of cuisines that virtually reach out for German wines. The not-really secret here is the variety in styles (dry to sweet, sparkling or still), grape varieties (Riesling and Pinot Noir, to name the top ones of either white or red) and the distinct levels of richness (light to full, to honey-like) plus, based on the cooler climate, the wines generally have a good amount of acidity (considered vital for a great food wine) and lower levels of alcohol than warmer climate peers.

Year of the Snake

Chinese New Year is coming up fast.  I’m starting to look at my annual wines to serve for Chinese New Year.  That post should be coming out soon.  But in the meantime, you may want to think about enjoying some celebratory dinners for Chinese New Year.  If you don’t want to cook, you could try the Year of the Snake Menu at Wild Rice, at both their New Westminster and Vancouver locations.  Here is their menu announcement.  Enjoy!

(Vancouver, BC) –  In western culture, the snake has a bad rep – tempter of Eve, denizen of the underworld, and just generally a slimy, slithery, creepy reptile. However, in China, the snake is honoured as wise, charming and decisive. As the snake transforms and renews itself by sloughing off its skin, Snake Years are seen as times of change and renewal. Things don’t stay static in The Year of the Snake.

Chinese New Year’s Eve on February 9th, heralds the Year of the Water Snake or lunar year 4711.  Anyone, who has been counting New Years for that long, should know a thing or two about how to celebrate it in grand style.

Inspired by classic Chinese feasts, Wild Rice Proprietor Andrew Wong and Executive Chef Todd Bright are offering a special menu that pays homage to the Year of the Water Snake. The Year of the Snake Menu will be available at both locations February 8, 9 and 10 for the auspicious price of $38.88 for two people (a very lucky number symbolizing ever-increasing good luck). 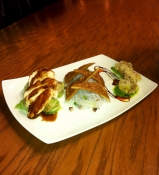 As in traditional Chinese banquets, each dish is rich with symbolic meanings meant to convey wishes for a happy, healthy and prosperous year. Some of the symbolism is based on homonyms where the word for a dish or ingredients sounds like another Chinese word with an auspicious meaning. Others derive their symbolic connotations from the colour or the fact that they look like another good luck object.  Wild Rice’s Year of the Snake Platter for Two is over-flowing with good wishes and great flavours. On it you’ll find:

All Chinese New Year banquets end on a sweet note to wish participants sweetness in the coming year and this dinner is no exception. Chef Bright has created his own house-made version of the iconic Fortune Cookie.

People born in the Year of the Water Snake are influential and insightful. They are motivated and intellectual; very determined and resolute about success. The long list of famous Snakes is studded with beautiful women and great idealists. Snakes are uncommonly attractive, wise and intense. However, their beauty can lead to vanity and self-centredness.

According to an ancient Chinese proverb “good fortune of the mouth is no mean thing.” We invite you to give your palate a treat and your year a lucky ‘sssstart’ by ‘ssssavouring’ Wild Rice’s Year of the Snake Menu February 8th through 10th, 2013.

Have you heard that Vancouver is hosting a national chef’s conference, June 12-15? That is next week! There are opportunities for the public to attend some of these events, and sample the fantastic food created by these chefs.

The Canadian Culinary Federation (CCF) was founded in 1963 and incorporated in Ottawa as a non-profit association in 1972. Since its inception, the federation has enjoyed a deep and long-standing tradition as Canada’s true representation of the professional chef and cook. Further details about the conference, please visit the conference website.

Some Events You Can Attend:

and much more!  You can buy tickets for these and other events at this web link.

You can see me at the Aboriginal Potlach Supper on Monday and Dragon Feast of the Century Luncheon in Richmond on Tuesday. The Potlach supper includes food and wine pairings.  I’m really looking forward to it.  I’ll be blogging about it before then and during the event.  Enjoy! 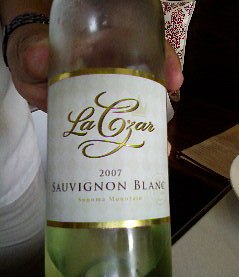 Last week I was lucky enough to vacation in Kihei, Maui. I had read good reviews about a Latin/Asian fusion restaurant called Cuatro, so decided to drop in, try their food, and enjoy a nice glass of wine.

Instead of ordering a main dish, and maybe missing out on many gems, we ordered 3 appetizers (pupus as the Hawaiians call them) dessert, and of course a nice glass of wine.  My wine selection was the La Czar Sauvignon Blanc 2007 Sonoma Mountain.  I had not come across this wine before in Vancouver.  I have read a bit about it since.  The vineyards for this wine are on east facing slopes at elevation, which gives the grapes morning warmth, but then coolness at night.  This enhances the flavour in the grapes yet keeps the acidity in the grape, which means that you will get a wine with good fruit flavour and refreshing acidity.  This Sauvignon Blanc, was very elegant.  It was not as high in acid as some New Zealand Sauvignon Blanc, but still enough to make your palate water.  The aromas and flavours were flowery with some citrus. Nice.

The star of the appetizers to me was the Seared Ahi Tuna on Roasted Vegetables. The tuna was done just right.  Nice and red in the centre. A latin (cumin, chile) spice mixture was applied to the tuna before grilling.  It was topped with a caper condiment, then the plate had a creamy sauce with balsamic vinegar.  The La Czar Sauvignon Blanc went nicely with the tuna, balancing out the many flavours in the tuna.

The Calamari appetizer was cooked perfectly.  No chewy squid here.  The batter was nice and light, and the acidity in the wine balanced the deep fried calamari and the creamy dipping sauce.  The duck breast quesadilla came with 3 different sauces: a salsa, guacamole, and a slightly sweet creamy sauce. I liked the duck with the salsa the most.

The dessert was Ice Cream with Fruit and Caramel Sauce, and it was big enough for 2 people to share. It came with two scoops of vanilla ice cream,  chopped fresh berries (raspberries, strawberries, blueberries, and banana), and topped with caramel.  Too bad they did not have any late harvest wine on the menu to pair with it.  Quite an enjoyable evening.

If you are vacationing in Kihei, drop by Cuatro. Cheers.