This week was Vancouver Foodster‘s 2nd Annual Tasting Plates on West 4th in Vancouver.  This event was easily walkable, with all venues being within a 4 block stretch of West 4th in Kitsilano.  We started at The August Jack where we had a smoked salmon duo, where one of the salmon was grapefruit cured.  I really enjoyed the citrus flavour embued into the salmon.  We had a thin sliced, house-made baguette, sliced red onion, and goat’s cheese foam, together with the salmon to make a nice tea sandwich.

Jackson’s Meats & Deli was next on my route, and it was my overall favourite of the evening.  They served a turkey/cranberry sausage together with a savoury bread stuffing, and a creamy pumpkin and ginger soup with cinnamon croutons.  The sausage it sounds like is a very old family recipe with at least 100 years of heritage.  For the upcoming Thanksgiving they added in some cranberries.  The sausage was moist and the meat ground fine.  To the sweetness of the cranberries, there was a nice hint of black pepper.  Highly recommended.  Their pumpkin and ginger soup was thick and warming, and I think would be great for the upcoming rainy season.

Whole Foods was location #3.  The standout item there for me was the Cauliflower Tabouli.  Normally Tabouli is made with cracked bulgar wheat, but more people probably make it here with quinoa.  Shredding the cauliflower into small rice sized pieces is a great alternative.  The tabouli was full of flavour and 100% healthy.  To balance the goodness of the tabouli,  Whole Foods also offered us sweet petites, small chocolates or lemon treats.

O5 Rare Tea Bar was a nice next stop where we tried cold matcha green tea and kombucha to sip.  The matcha was hand made for us and served in small cups.  The kombucha was something new to me, and I will try it again.  Kombucha is a fermented tea that is sweetened with sugar or honey.  It is served on tap, and is slightly sparkling, with an alcohol content of between 0.5-1%, which is still viewed as non-alcoholic.  The kombucha to me had an apple flavour to it, and was slightly off-dry.  I was told you can buy their house-made kombucha in bottles to take home.  Give it a try.

The Indian Oven served us a variety of pakoras, made from cauliflower and Indian paneer cheese.  We were getting quite full by this time, but all the pakoras were devoured.  The paneer eventhough it was deep-fried did not melt like a mozzarella. 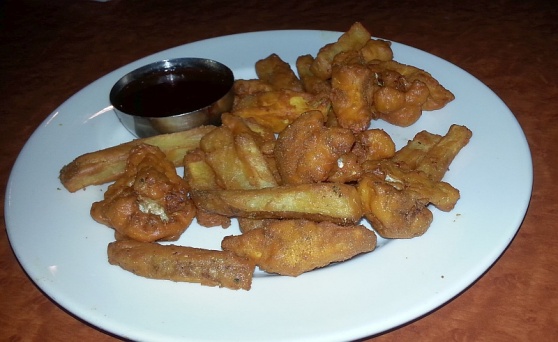 Our last savoury Tasting Plate was from Las Margaritas Restaurant.  Chile Verde and Cochinita Tostada. Chile Verde is one of my favourite dishes, chunks of pork simmered in a green chile sauce.  This one was OK.  I would have preferred a bit more of the green chile flavour.  The Cochinita Tostada was quite spicy and I believe was made with shredded pork and served with a red chile sauce and refried beans.  If you like spicy food, give this one a try. 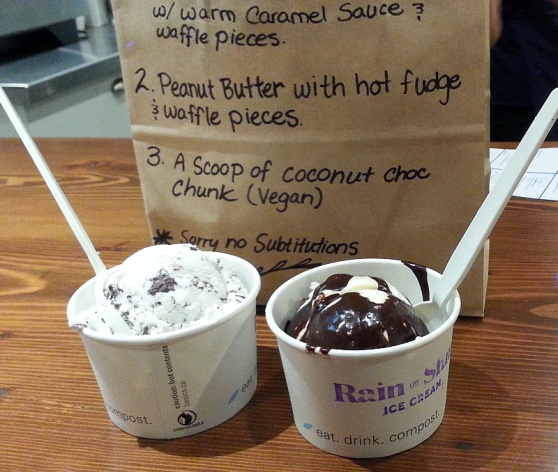 All the venues served something I really enjoyed, and I hope you will have a chance to enjoy it to. 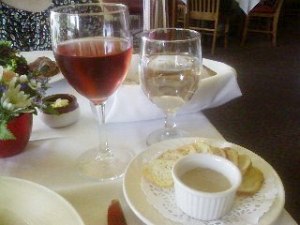 It was a beautiful day on Saturday, so I decided to have lunch at Mistral French Bistro in Kitsilano. I’d never been there before but have heard that the food is very good. I checked through their website to see that they have 4 Fixed Price menus for lunch. All around the $20 mark, that includes appetizer, main course and dessert. A very good deal in my opinion.

So my selection was the “Provence” lunch ($20). My selections for my lunch were:

To the appetizer and Main course, I enjoyed a glass of L’ORANGERAIE Rose 2009. This wine is from Vin de Pays d’Oc, France and is a mixture of 60% Cinsault, 20% Grenache, 20% Syrah. The wine had nice light cherry flavour, nice acidity, and low tannins. This rose went very nice with the Provencal appetizers and balanced the heaviness of the stew.

The braised lamb shoulder stew was quite amazing. Many different flavours merged together. The stew sauce had the herbes de Provence. There were fresh baby carrots and beans as well and turnip that exploded with flavour. The vegetables still had a nice amount of crispness to them and provided nice texture to the lamb.

The chocolate mousse for dessert was fantastic. I enjoyed it with a cup of coffee. A truly enjoyable lunch.

To check out their other fixed price menus, you can click on this link to the Mistral French Bistro. Enjoy!